Do you Love Survivor? Well we Do and Jeremy Collins Winner of Survivor Cambodia Loves Slyde The million dollar (yes you read that right) One milllion dollar winner of Survivor this season goes to Slyde's dear friend and uber Slyde fan Jeremy Collins!  I have been friends with Jeremy and Val Collins for nearly a decade now, and can tell you there is no one more deserving of a million dollars than this amazing family.  It has been a wild ride for them over the past two years of the filming and airing of two Survivor seasons.  And through that time they stayed true to themselves and they remained the most honest, caring, and loyal people I know and I couldn't be happier for these two.

Jeremy and Val have also been huge supporters of Slyde Handboards as you can see from Jeremy rocking the Slyde Tee in all his Survivor interviews he the day after following his big win. CONGRATS GUYS!!!! 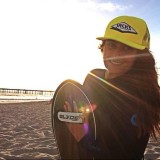 Angela Ferendo grew up in Rhode Island, spending her summers on the ocean, both sailing and bodysurfing. Having a passion for sports, fitness and health, she graduated magna cum laude with a bachelors degree, double majoring in Physical Education and Health Education from Plymouth State University. She moved to California 3 different times before making it her permanent home in LA in 2012 - needless to say she has driven across the country 4 times. In her spare time she teaches zumba, runs with Cowboy the Dog, and puts up with Steve's shenanigans. Angela now wears multiple hats at Slyde including: business planning/development, customer service, logistics, sales, and finances.